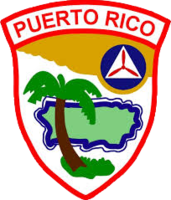 Puerto Rico Wing members and their CIvil Air Patrol colleagues from three other wings are responding in the air and on the ground to catastrophic flooding caused by Hurricane Fiona.

Members are flying damage assessment photography missions over affected areas, including structures such as roads and bridges, power plants, schools, and hospitals. The images they provide help emergency management agencies decide where damage is most severe and resources are most needed.

“These difficult times reminded us of the lessons from Hurricane Maria,” said Lt. Col. Carlos M. Arroyo, CAP incident commander, referring to the September 2017 storm that devastated the island. “From what we learned, and the training acquired, the Puerto Rico Wing and fellow CAP members improved our response time and use of top-end technology.”

About 55 CAP members have participated in the disaster response so far, representing not only the Puerto Rico Wing but also Connecticut, Missouri, Tennessee, and CAP National Headquarters at Maxwell Air Force Base, Alabama.

CAP has carried out 26 flights totaling 26.9 hours, with aircrews accounting for 17.6 hours and sUAS teams for 9.3 hours, The aerial missions have generated 10,339 images.

Civil Air Patrol planes launched Sept. 20 in the community of Caguas, followed by two ground teams documenting high-water levels from recent flooding there and at Cayey.

With most of the island lacking electricity and water, the Puerto Rico Wing has established a temporary incident command post in the municipality of Carolina with stable communications, including phone lines and internet access. The wing is maintaining 24-hour contact with other CAP Southeast Region wings – Alabama, Florida, Georgia, Mississippi, and Tennessee – and National Headquarters.

“The Puerto Rico Wing, Southeast Region and our CAP colleagues from other regions and wings continue demonstrating their commitment to volunteer service during new challenges,” said Col. Edgardo Torres, Puerto Rico Wing commander. “They have exceeded every expectation, and their level of teamwork is unprecedented. We as leaders are proud of their effort and selflessness in helping the people of Puerto Rico to overcome this disaster”