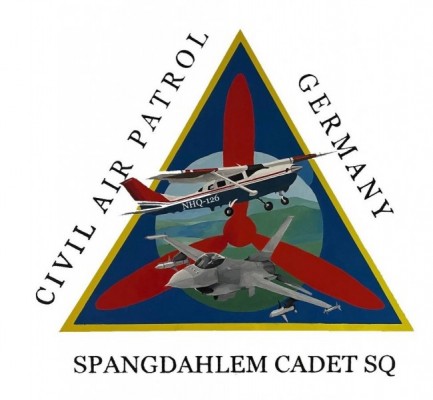 The cadets of the Spangdahlem Cadet Squadron at Spangdahlem Air Base, Germany, recently experienced a rare opportunity for Civil Air Patrol’s overseas members: the chance to experience flight in a glider.

Thirteen cadets and five senior members met with the pilots and ground crew members of the South Eifel Glider Club, operating out of a small grass runway called Utscheid Air Field about 6 miles from the Luxembourg border.  Glider club president Leonie Collin agreed to host the Civil Air Patrol cadets for the day and enable them to learn about unpowered aviation.

First, the cadets received a safety briefing and technical briefing about the gliders and the unusual winch system used for launching the aircraft. Instead of the usual method – where a tow plane pulls the gliders up into the sky – a large motor mounted on an old military cargo truck pulls a cable about three-fifths of a mile in length more than 60 mph, hurtling the glider to over 1,000 feet above the ground in less than 30 seconds.

Each cadet was able to take to the sky with a certified glider instructor pilot at the controls answering questions about gliding and pointing out local landmarks.

The flights were relatively short — only about five to eight minutes – because of overcast conditions, light winds, and some scattered showers. All  those factors limit the natural lift provided by updrafts and the flow of wind over hills. Under better gliding conditions, pilots of the glider club have been able to remain aloft for over eight hours.

Many cadets were initially nervous about the launch, but all had huge smiles on their faces by the time they were back on the ground.

“It was really nice!” said Airman 1st Class Alyxandria Herring. “It was a little nerve-wracking at first, but after we actually got in the air it was very calming.”

After landing, the cadets assisted the ground crews in repositioning the gliders for the next flyer.

Cadets were also able to visit the winch vehicle to see how the machine provides the initial boost to get the glider airborne.

The winch operator has to keep a close eye on the winds as well as the glider’s airspeed, being careful not to exceed the aircraft’s structural capabilities. The operator consults a list inside the control booth showing each type of glider at the airfield and its minimum and maximum allowable airspeeds, then adjusts a limiter on the throttle to prevent accidentally boosting the speed too high.

Then, upon receiving radio and hand signals from the ground crew saying the glider and pilot are ready to go, the operator unleashes the 400-horsepower motor to begin the flight.

Once every cadet had flown, the gliders were towed back into the hangar, where the cadets helped clean and dry the aircraft for storage.

The CAP cadets then shared a barbecue meal with the club members, expressed their thanks, and safely returned to Spangdahlem Air Base with lifelong memories of their first unpowered flight.
_____
Capt. James Lloyd
Commander
Spangdahlem Cadet Squadron