From Cadet to State Emergency Official: ‘CAP Prepared Me for This’ 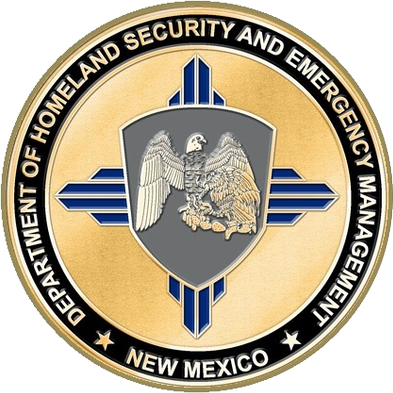 When President Joe Biden visited New Mexico this summer to learn about the largest wildfires in the state’s history, he was briefed by a New Mexico Wing member only two years removed from his Civil Air Patrol cadet days – 1st Lt. Mark Chappell, acting director of the state’s Emergency Operations Center

When Chappell spoke before the cameras, he said later, he was fully aware millions “were watching and listening to every word I said.”

At the same time, he added, he felt “like this is exactly what CAP has been preparing me for.”

The president came to the state Department of Homeland Security and Emergency Management’s Emergency Operations Center in Santa Fe to hear about the Calf Canyon/Hermits Peak Fire, the Cerro Pelado Fire, and the Black Fire – giant conflagrations that had burned more than 1 million acres of the state’s wildlands and destroyed numerous homes.

During his 15 minutes with Biden, Chappell briefed the nation’s chief executive on the operations center’s role, its functions during a disaster, and its work to manage the historic wildfires.

Chappell’s encounter with the president and, subsequently, with the media was a major step in a nine-year journey that began in Civil Air Patrol. He traces his involvement in emergency management to his days as a CAP cadet.

He planned and executed monthly lessons that cadets could use for Ground Team 3 qualification. He also worked with the emergency service officers of three squadrons to put together a ground team academy with the goal of accomplishing as many Ground Team 3 tasks as possible, including a field exercise conducted over three days during annual spring breaks.

After becoming a senior member in April 2020, Chappell began serving as the squadron emergency services officer and emergency services training officer. The COVID-19 pandemic had begun the previous month, which gave provided him with yet another opportunity to serve and benefit both his fellow CAP members and New Mexico residents as an incident commander for related mission.

In that role, Chappell organized ground teams for each mission. He coordinated air and ground teams for pickup and delivery of supplies and test kits from remote locations in New Mexico, emphasizing all COVID-19 safety protocols  and the critical need for quick, but safe, turnaround times.

“He was professional, he understood and demonstrated military protocol when interacting with the various military departments for the COVID missions, and he consistently remained focused and knowledgeable,” said Lt. Col. Andrew Selph, who served as the wing’s director of cadet programs during Chappell’s cadet tenure and his first 1½  years as a senior member.

“We knew we could rely on his skills and judgment at all times. He committed himself to the mission, and we were successful for it,” Selph, now New Mexico Wing vice commander, said.

Chappell was still a cadet when he was deployed to pilot drones in the CAP sUAS program’s mission in response to the devastating January 2020 earthquake and subsequent tremors in Puerto Rico. His transition to senior member occurred during the mission, which generated more than 13,000 aerial photos for the Federal Emergency Management Agency’s use in evaluating the damage and the best way to respond to it.

He continues to draw on his sUAS training and experience as the wing’s assistant emergency services officer for sUAS. That role made him responsible for training the wing’s new drone team.

His CAP duties and experience complement his service with the state Department of Homeland Security and Emergency Management. His roles at the state Emergency Operations Center include operations officer – response, geospatial information systems specialist, and unmanned aircraft systems program manager.

Even as a cadet, “you could rely on his knowledge and skills,” Selph said. “Lt. Chappell was always very sharp and perceptive.”

“It was exciting to watch the fledgling bird stretch his wings to fly… and he did fly… with excellence in everything he accomplished,” Eckert said.

“He is amazing!” said Col. Annette Peters, New Mexico Wing commander. “We are so fortunate to have him as a member of our wing.”

Beyond his passion for emergency services, as a cadet Chappell also participated on the squadron’s CyberPatriot team.

His father, Cael Chappell, then a cadet sponsor member of the squadron, originally opened up an area in the family business to accommodate the team’s six-hour weekly practice sessions. Over the next two years, the skills father and son gleaned from CyberPatriot enabled them to create a squadron website that squadron staff credit with helping increase the cadet corps from about 20 youth to 35.

Not surprisingly, he applies his computer skills to his emergency services work for the state, using that acumen to predict, intercede in, and possibly prevent the spread of fires like those that led to Biden’s trip to New Mexico in June.

That’s just another example – albeit a high-profile one – of how “CAP has shaped my entire life,” Chappell said.

“The real-life experience on disasters” he gleaned as a member enabled him to apply for a position with Homeland Security and Emergency Management “and to step up to the occasion as EOC director,” he said.

Chappell stresses the importance of his experiences during and after his cadet days.

“CAP has been an incredible influence as I’ve gone through my education,” he said. “While in high school, CAP’s numerous programs helped me branch out into a variety of different activities, letting me try a wide range of possible career paths.”

After that, “throughout college, CAP allowed me to narrow down exactly what I wanted to do and provided the structure I needed during difficult times such as the COVID-19 pandemic,” Chappell said.

“Having the opportunity to work on real missions, with real impacts, during the pandemic helped to shape my life moving forward, showing me that I wanted to pursue a degree and career in emergency management,” he said.

And when it came to responding to the wildfires and meeting the president, Chappell concluded that “CAP prepared me for this … for years – instructing emergency services as a 14-year-old, having to speak in front of a room of strangers, going through the cadet officer (staff duty analysis) process as an 18-year-old, having to make tactical decisions as an incident commander at 21, then making life-and-death decisions (the following year) as a 911 dispatcher and being responsible for the response to the largest wildfires in New Mexican history as the EOC director at 22.” he said.

“In retrospect, it feels like this is exactly what CAP has been preparing me for.”
_____
Maj. Mary A. Fox
Commander
Albuquerque Heights Composite Squadron
New Mexico Wing

This profile of 1st Lt. Michael Chappell is seventh in a regular series of articles showcasing how CAP and its members make an impact throughout the nation.