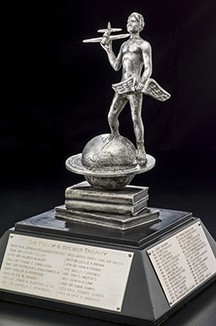 According to the association, Mallett is being recognized for “her passionate and sustained aviation education leadership and ambassadorship to create enduring collaborative partnerships, programs, and products, which have impacted and inspired over 2 million American youth since 1986.”

“I am very humbled and honored,” Mallett said. “Aerospace education has been my passionate work for 36 years. I have been able serve alongside and be mentored by the most amazingly dedicated and passionate like-minded people and organizations, collaboratively working toward the common mission of inspiring our nation’s youth onward and upward.”

Mallet’s aviation education journey began in 1986, when the Alabama Department of Aeronautics asked her to pilot an aviation program.

The Montgomery elementary school reading teacher had little knowledge of or experience in aviation, but she began learning about and integrating aviation education into her curriculum. By the end of the first year, she had begun organizing orientation flights for her students and fellow teachers.

As Mallett rose toward an administrative staff position, her entire school became involved in aerospace education, ultimately gaining recognition nationally and internationally. She also conducted aerospace programs at her alma mater, Auburn University Montgomery, and throughout Montgomery Public Schools and the state.

She started after-school Aerospace Clubs where Space Camp trips for educators and students allowed them to venture beyond local rocketry demonstrations for the community and become integrated in even more aerospace explorations.

In 2004, she worked with the national STARBASE program director at the Pentagon to bring a STARBASE Academy to Maxwell Air Force Base. She has continued working with and supporting Maxwell STARBASE and partnering with STARBASE academies across the nation to help provide educational resources for academy teachers.

After 31 years as a public school teacher and administrator, she retired in 2006 to accept a newly created aerospace education position at CAP National Headquarters at Maxwell. She worked to develop programs similar to those at her former schools for teachers across the nation.

By the beginning of the 2007 academic year, she had created and launched CAP’s Aerospace Connections in Education (ACE) program for grades K-6. ACE provides 22 national academic standards-based lessons per grade level that cover academics, good character, and physical fitness.

Free for CAP’s educator members, ACE provides online, interactive curriculum and class sets of educational items aimed at building an early interest in aviation that will help encourage and prepare youth to set their sights on an aviation-related STEM career.

Since its beginning 15 years ago, the ACE program has impacted and inspired over a half-million youth in classrooms across America.

In 2009 Mallett became a member of the national Air Force Association’s Aerospace Education Council and has led its national AFA/Rolls-Royce Aerospace/STEM Teacher of the Year program since 2012.

She has coordinated national STEM programs between the AFA (now the Air & Space Forces Association) and CAP for 15 years, promoting the AFA’s CyberPatriot and StellarXplorers programs. She’s now working with the AFA team to explore initiating a national aviation program.

Since 2013, over 40,000 kits have been provided at no cost to teachers, youth organizations, museums, libraries, aviation organizations, CAP squadrons, and Air Force Junior ROTC units across the nation. The STEM Kit program includes over 20 free kits in the areas of aviation, space, and cyber and has imparted knowledge about and interest in STEM topics and careers to over 2 million youth.

Mallett now  coordinates aerospace and STEM education outreach for CAP. Most recently, she worked to create such new national CAP programs as an online repository of aviation-related educational resources; the ACE Plus program, where CAP squadrons adopt fifth- through eighth-grade classrooms for virtual and in-person instructional and aviation demonstrations and career exploration support; and the High-Altitude Balloon Challenge for cadets.

The balloon challenge’s national ambassador and award benefactor is retired Air Force Col. Joe Kittinger, test pilot and high-altitude balloonist, who nominated Mallett for the Brewer award. He attributes his participation in the balloon competition to “the professional expertise I knew Susan would bring to a new national STEM program. As a high-altitude balloonist and scientist, I see this program as another avenue to build student interest in science and a huge success for CAP.”

“Like many in aviation, Susan came to the industry through an indirect route,” said Greg Principato, NAA president. “But once she found aviation, her passion for educating future generations found a new calling.

“Susan has left her mark in so many ways and has a legacy that will live forever through the lives of those she has taught and inspired. She is so deserving of this prestigious award, and it is our honor to present it to her.”