Dr. Robert N. Barger III, 82, was awarded the Antarctica Service Medal on May 15 for his service as the official Civil Air Patrol participant in 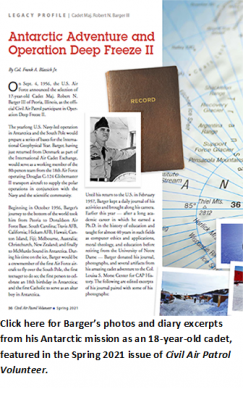 Barger, a retired professor at the University of Notre Dame, participated as a teenager in a yearlong U.S. Navy-led operation in Antarctica and the South Pole that would prepare a series of bases for the International Geophysical Year.

“Dr. Barger was a true CAP pioneer,” Phelka said. “Our knowledge of the continent [was limited at the time], and he was part of the first U.S. Air Force expedition to go there. To be chosen from 50,000 cadets to be ‘the one’ is a mighty achievement unto itself, but then to be entrusted with an array of responsibilities on the other side of the world?

Barger, through his wife, Jo, thanked Phelka for his presentation. Upon receiving the medal, he provided a formal CAP salute.

Barger was a 17-year-old CAP cadet major from Peoria, Illinois, who had just returned from Denmark as part of the International Air Cadet Exchange when he was selected by the Air Force for the Antarctic expedition. He served as a working member of the 80-member team from the 18th Air Force operating Douglas C-124 Globemaster II transport aircraft to supply the polar operations in conjunction with the Navy and the scientific community.

Congress established the Antarctica Service Medal on July 7, 1960. It was intended as a military award to replace several commemorative awards issued for previous Antarctica expeditions. It is considered an award of the U.S. Armed Forces, issued in the name of the Department of Defense.

The medal may also be awarded to U.S. civilians and citizens of foreign nations who participate in a U.S. Antarctic expedition on the continent at the invitation of a participating U.S. agency.

To qualify for the Antarctica Service Medal, personnel must train or serve 10 days stationed on Antarctica or aboard vessels in Antarctic waters. “With his months of service on the Antarctic ice and the air above our southernmost continent, Dr. Barger more than qualifies,” Phelka said.

Upon his return to the U.S. in February 1957, Barger kept a daily journal of his activities and brought along his camera.

Earlier this year — after a long academic career in which he earned a doctorate degree in the history of education and taught for almost 40 years in such fields as computer ethics and applications, moral theology and education before retiring from Notre Dame — Barger donated his journal, photographs and several artifacts from his cadet Antarctica adventure to the Col. Louisa S. Morse Center for CAP History.

Edited excerpts of Barger’s journal, paired with some of his photos, are featured in the Spring issue of Civil Air Patrol Volunteer magazine,